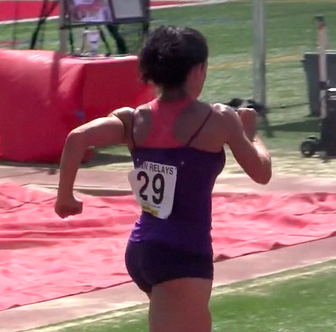 Hip, Hip Her Racewalking
By Loren Martz
I am bent. Crooked.

There is the distinct possibility that, eventually, I will be able to see what’s behind me without turning around. But in the meantime, this twisted sister needs to keep moving. Scoliosis, the doc says. No biggie, I think. Then he reels off a list of orthopedic anomalies. I had hoped he was demonstrating his ability to memorize a medical textbook, but it turned out to be a diagnosis of the spinal x-ray of a stegosaurus that, coincidentally, was me.

Doctor Doom’s mouth moved a lot but I didn’t hear a thing except, “could put you in a body brace...blah blah...spinal fusion, bone grafting, steel pins...”

Or, I thought, I could jump out that window. Maybe I said that out loud.

He suggested that if I could ease up on high impact activities, I could perhaps postpone or eliminate the necessity to rebuild my chassis. I thought about my father-in-law’s rusty old ’73 Dodge Colt (which was, by the way, ten years younger than me...) It had been through some reconstruction and technically, it could move, but mostly by tow truck. I conceded to give up running.

So what to do now to stay fit? My brain ached at the thought of plodding along on the elliptical like a gerbil for the rest of my life.

I had tried walking, but even with a brisk stride I couldn’t really get my heart rate up. It was pleasant, but it lacked the intensity I was looking for. Let me be more honest: I couldn’t work up enough sweat to make a difference on the scale when I got back from my walk.

That’s when I became a walker stalker.

I had once seen an Olympic race walking event on TV and recalled how lean and athletic the walkers were. And they were fast. I mean, like faster than I could ever sprint. I Googled everything I could find about race walking and discovered a free clinic on Long Island led by Dave McGovern, a guy with the distinction of having made the qualifiers for the Olympic trials 7 times—more times than any other American athlete in any other sport, ever—or as Dave likes to say, the fastest American to never make the Olympic team...

Anyway, I was fascinated by the surprising athleticism of the sport and the particularly goofy gait of a race walker. (Something along the lines of “I have to pee, I have to pee!”) This was clearly not my grandma’s power walking. There is a specific form and rhythm to race walking and I thought maybe I’d check out the clinic a couple of times, just to see if what it was like.

What it was like was hard. Like the kind of hard when you are not sure if you will be able to go home unassisted. I have been training myself and other people for 32 years. I consider myself fairly fit for a 50-year-old woman with a rotini shaped spine, but this was a whole other level of challenging. I now know what it is like to be on the trainee side of training and would like to publicly say my sorries. Suddenly, I get the cursing, name-calling, begging, and crying (I do it).

I also get this: Nothing bad happens when you aren’t good at something.

Maybe this is not news to you. But frankly, I had been living under the assumption that my life would implode if anyone came to know about my cache of defects. Mostly, how I have done my life for half a century is this: I do what I am good at and if I can’t pick something up quickly, well, I just don’t do that. I can’t stand the sight of myself flailing around and I’m not keen on anyone else seeing me like that either. Race walking, however, has been an exercise in humility for me. I am not good at it. I am still at a point where it is not even exactly clear what I am doing. Cars are not sure if they need to stop as I cross the street and seagulls just stand in my path as if to say, go around, lady. I have taken to racing against hobbling octogenarians who have unwittingly become my “competition” by virtue of their position in front of me. In my mind, I am flying at top-notch speed, but the sight of my shadow slogging it out beside me tells another story.

Nevertheless, I work hard at race walking and I am slowly improving. I have committed to walking as fast as I possibly can every time I go out to walk. Not compared to last time. Not compared to anyone else (except maybe if Grandma Moses is out taking a stroll). But, just right then, at that moment, the fastest my legs will carry me. There is so much freedom in that.

And results! Since I began race walking a year ago, I have lost 16 pounds. Most of my walks take 20 to 30 minutes. Once or twice a week I will train for an hour, doing interval sprints. My weekly practice at Dave McGovern's clinic gives me a swift kick in the butt. The key to both my weight loss and physical conditioning has been this increase in the intensity of my training routine. I encourage you to bring a new level of intensity to your workouts whether they are 10 minutes or two hours. Put down all your considerations about looking good and doing it best, or how it used to be and why you’re out of shape now, and blah, blah, blah...because all of that just gets in your way. Get your head in the present moment, play full out and be fearless!

If you are interested in race walking, feel free to email me at fitnessbyloren@gmail.com for details. And check out my coach Dave McGovern’s site at http://www.racewalking.org/ for more information about the sport!